Khedut Sahay package | Government of Gujarat.Khedut Sahay package 3700 crore
The historic five-day monsoon session of the Gujarat Legislative Assembly has begun. The legislature saw a complete social distance. In addition to the House, the MLAs took place in the Prakshak Gallery as well as all the MLAs wearing masks on their faces. In the second meeting, which started in the afternoon, the Rupani government announced an aid package of Rs 3,700 crore for farmers. 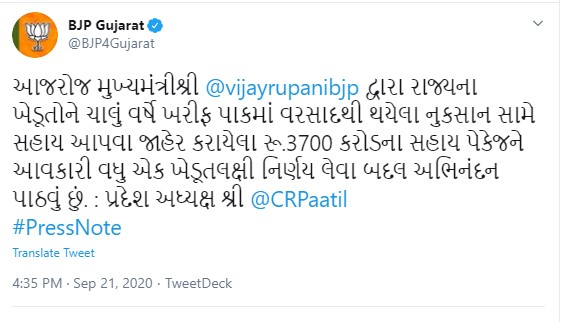 In a statement under Rule-44 on the first day of the seventh session of the 14th Legislative Assembly as the Leader of the Assembly, Chief Minister Vijay Rupani said that the Gujarat faremrs relief package ) Announced. 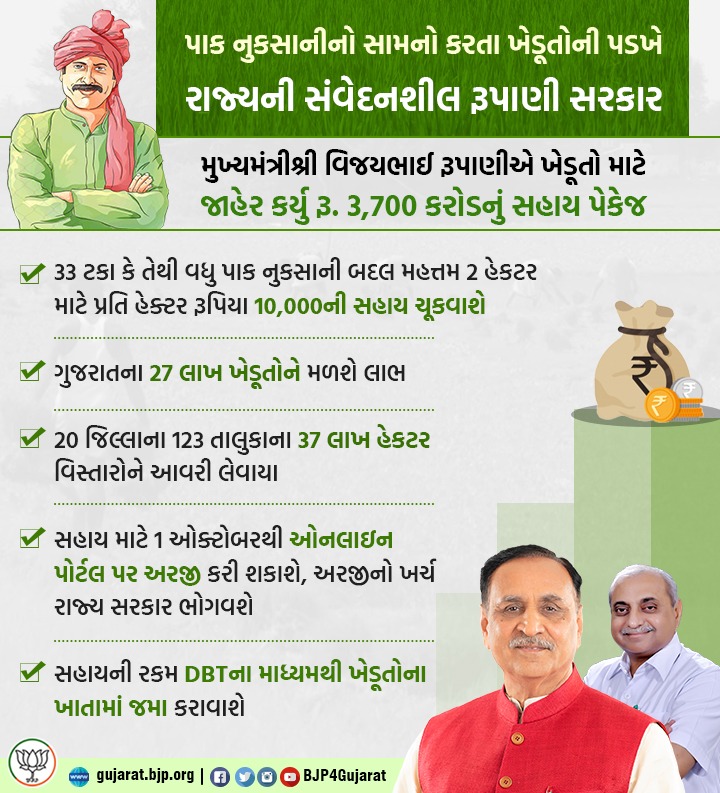 The Chief Minister, in a statement to the Legislative Assembly under Rule-44, said, “The onset of monsoon in the state this year was well and timely. In the early stages, the rains were favorable for agriculture and all the districts of the state had very good production conditions. However, heavy rains lashed some talukas of the state during the month of August and there were reports of crop damage due to flooding.

Chief Minister Vijay Rupani has said that heavy rains in some talukas of the state in August 2020 have resulted in flooding of farms causing damage to crops. The onset of monsoon in the state this year was good and timely. In the initial stage, there was moderate rainfall and very good production conditions in all the districts of the state, but during the month of August, some talukas of the state received heavy rains and due to flooding in the fields, damage was reported to crops, mainly groundnut, cotton, paddy, sesame, Crops like millets, pulses, vegetables etc. have been damaged.

An area of ​​37 lakh hectares will be eligible for assistance

The state government has repeatedly announced that the state government was considering providing assistance to farmers in the state in case of crop loss of 33 per cent and above. Out of the estimated 51 lakh hectares of planted area in 123 talukas of 20 districts of the state, an estimated 37 lakh hectares will be eligible for assistance as per the aid norms after considering the assessment of the survey conducted by the Agriculture Department on September 19 damage in some talukas in kharif season this year.

In case of crop loss of 33% and above, a maximum of Rs. 10 thousand per hectare assistance will be paid. In addition, no matter how little land the farmer has, he should be paid at least Rs. The state government has decided to pay Rs 5,000. The assistance package will benefit an estimated 27 lakh farmer account holders in the state. Not only that, if there is an assessment of crop damage in other talukas of the state, the state government will also consider it.

The portal will be open from October 1

The portal for online application for this assistance will be open from October 1, with the cost of applying online being borne by the state government. Farmers will have to apply at the nearest e-gram center. At the end of the approval process as per the application, the assistance will be deposited directly online in the farmer’s bank account, the CM said.

In case of 33 per cent and above crop loss, a maximum of Rs. 10 thousand per hectare will be paid for 2 hectares. In addition, it has been decided to pay at least Rs 5,000 to the farmers even if they have less land. The assistance package will benefit an estimated 27 lakh farmer account holders in the state.

If crop damage is estimated in other talukas of the state, the Raja government will also consider it. The portal for online application for this assistance will be opened from 1st October 2020. The cost of applying online will be borne by the state government. Farmers will have to apply at the nearest e-gram center. The cost of this scheme will be borne by the State Government under SDRF as well as additional cost.

The Gujarat government has made a big announcement for farmers for the damage caused by heavy rains. Chief Minister Vijay Rupani has announced assistance to farmers worth Rs 3700 crore in the Gujarat Legislative Assembly.

Currently, farmers’ crops have been severely damaged due to heavy rains in the state. Then Chief Minister Vijay Rupani made a statement in the Legislative Assembly on this matter of public importance. The Chief Minister said that Rs 3700 crore would be provided to farmers. More and more farmer account holders will get assistance. In which 27 lakh farmers will be assisted. 123 talukas of 20 districts will be assisted. The farmer will be able to register online from October 1. The government has made a big announcement about the loss to the farmers.

One Nation One Card: A wonderful system for the poor

Government Scheme's, Government Yojana, Sarkari Yojna|March 17, 2021
One Nation One Card: A wonderful system for the poor from

No more pages to load.